For business transformation: Reconnecting with the Soul of business. Streamlining the business so the Soul can flow.

For personal growth: assisting people in becoming aware of the different phases of the human game and to inspire them that a move from lack and fear to abundance and joy is possible for everyone.

Hi, my name is Jan Vermeiren. I’m the founder of Life is a Game!

In my life before Life is a Game! I was the founder of Networking Coach (which I sold in 2014; it is now part of Scredible). I wrote two international bestsellers, Let’s Connect! and How to REALLY use LinkedIn!

Until now Networking Coach has been working for more than 450 companies and organizations worldwide. We were the first LinkedIn training partner on planet Earth. So you could say that I was pretty successful ☺.

However, something was missing. I felt that I had touched upon the essence of Life now and again, but I always lost the connection. Now I understand that I was being pulled back into the Phase 1 game (as explained in the book “Life is a Game!“). This motion was felt in my work and in the company. Although both books and all the training programs at Networking Coach were based on universal or spiritual principles, the focus was more on practical insights and technological tips about how to be successful in Phase 1 of the human game.

With Life is a Game! I officially go to the next “level” in my human game. After having played for some time in Phase 2 and having experienced life in Phase 3 once in a while, I’m now ready to assist others in doing the same: living a lighter, more peaceful, more abundant and especially much more joyful life!

If you want to play along, read the book, browse the Library, attend a session, host one, sign up for the Soul Business program or suggest something else yourself!

I know what it takes to build out of a passion something from scratch (my previous company Networking Coach in which nobody believed in at first), be very successful (international best sellers “Let’s Connect!” and “How to REALLY use LinkedIn” and the first training partner of LinkedIn worldwide), almost go bankrupt (with the Generous Networkers project), doubt myself and have a burn-out, getting back on my feet (with the successful sale of Networking Coach), reflect about what happened and share the insights (in the book “Life is a Game!”) and finally from a renewed connection with my passions bring something new to the world (this Soul Business program and constellation for entrepreneurs).

In other words I know what it is to (often alone) bring something to the world, with ups and downs. If we work together, you can ask me any question. I will share both my successes and failures. Because that is information people often don’t have access to. 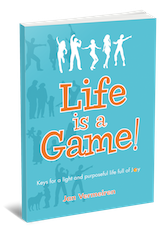